Get the BAND Token and Safely Secure it on Numio

Download Numio today for free and get BAND tokens.

The blockchain needs real-world data to truly enter the mainstream of everyday life. Although new blockchains are being built everyday inside of existing real-world systems, it remains the fact that the utility and operational range of blockchains can grow exponentially if the transactions and smart contracts within it can react to “off-chain” data. This is where Oracles come in.

The Importance of Oracles

For example, if a bookmaker wanted to pay out a smart contract based on the winners of a horse race, it would need to feed that data from off-chain – the racetrack – and onto the blockchain so that the winners could be paid out. To get the data from the racetrack onto the blockchain, you need a trusted Oracle feeding it in, correctly and accurately.

To do that, you need to trust the provider of the data. The Oracle has to be legitimate. That’s where Band protocol comes in. It’s a decentralized oracle, akin to Chainlink, that draws upon a network of incentivized data providers and validators who ensure trusted information taken from Web APIs is fed onto the blockchain. The incentives built into the protocol to make all users participate fairly have made it a reliable source of financial information.

Initially, it was an Ethereum blockchain, but they’ve now upgraded to their blockchain by harnessing Cosmos’s technology. This allows its network to act as an Oracle for multiple different blockchains – including the entire Cosmos ecosystem. It is heavily involved in the utilization of bridges created by the IBC protocol. Of course, it’s still available as a dApp on classic blockchains like Ethereum.

Band Protocol in the DeFi space

Band has established itself as a rising star in the DeFi space. The most obvious use of the protocol is finance metrics, and they have partnerships with both Binance and CoinGecko to help supply that data to the market economies currently flourishing on the blockchain. With key numbers like the price of gold and oil at any given nano-second already finding a natural home in the DeFi market with synthetic tokens that underpin their cost, there is a clear use case for the protocol. However, it has its sights set higher. Sports scores, weather forecasts, and esports data can all be reliably fed through its protocol’s oracles.

Band protocol’s native token is the BAND token. The Band protocol awards validator status to the top 100 BAND token holders. There are rules too, they can’t go offline, they must respond to network events and of course, they must be accurate. As other invested validators can disprove any false actors, then there is a mutual incentive for everyone to be right, as an individual who breaks the rules will lose their investment, and a collective who does it will lose everything. They are paid significant yield on their staked BAND tokens to reward them for continuing to participate in the protocol. Band token holders of all denominations can participate in governance and stake tokens to earn a share of the fees paid for their work as validators. All this is governed by sophisticated technical specs.

Band protocol is a unique approach to creating a decentralized network. It trusts its big players but hopes that because they are all big enough they have the trust to deliver information the blockchain wants to guzzle on to truly grow. Its cross-compatibility through the technology of Cosmos and IBC, as well as its suite of blockchain dApps, have made it a trustworthy and effective filter for the on-chain data that will catapult the blockchain economy to the next level.

Is BAND Hard to Get?

Getting cryptocurrencies, whether by purchasing or trading, can be a daunting prospect for beginners. This is particularly true for any cryptocurrency that isn’t Bitcoin or Ethereum – with Ethereum tokens, also known as ERC-20 tokens, such as BAND being a prime example.

If you are thinking about getting BAND then Numio is a great choice for handling your assets. Numio allows you to pay people using your stored BAND assets, as easily as if it were cash. If you are a bit more crypto savvy you can also trade and swap BAND at the touch of a button.

How can I get BAND?

Getting BAND is easy on Numio. You can use your credit or debit card to purchase ETH or USDC, which can then be exchanged for BAND*, you can swap or trade it for other ERC-20 tokens (up to 100x cheaper than other wallets), and you can send or receive it as a payment. Whatever way you choose you can be sure that you are always in full control of your BAND. 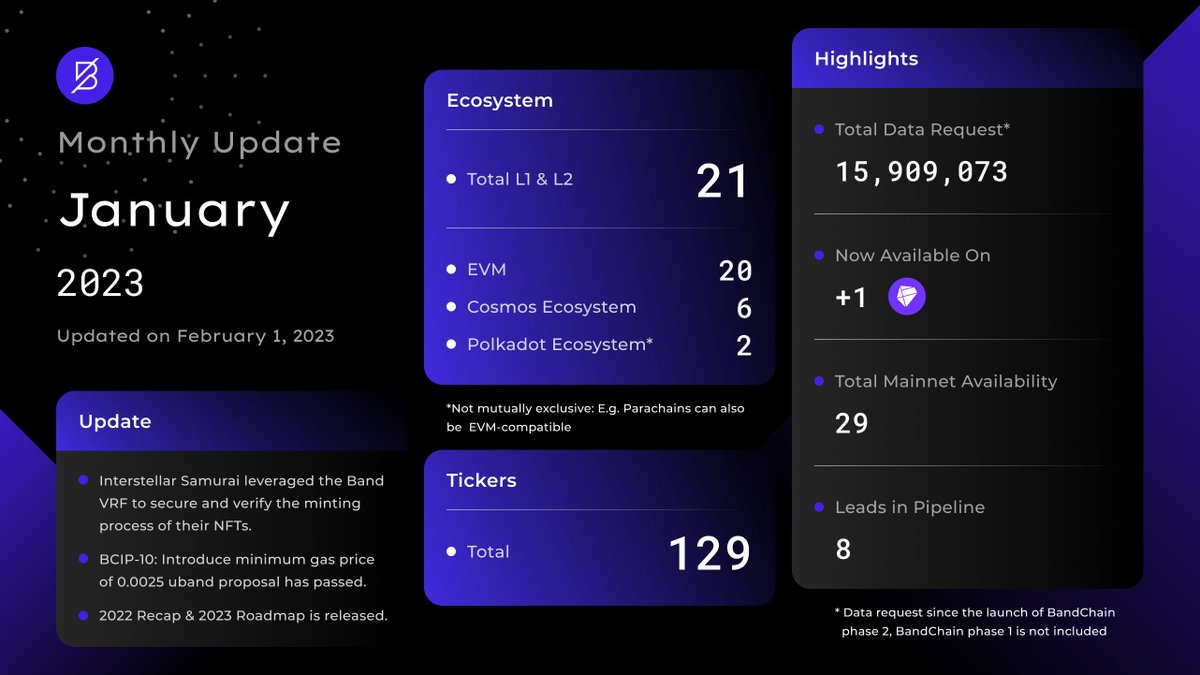 3/ Check out this article for full details👉 . $BAND #bandchain

2/ All validators are strongly encouraged & recommended to update the gas price to 0.0025 uband 🤝 Discover the importance of setting the gas price on the BandChain 👉 . $BAND #bandchain

2022 was very much a BEAR market, but it cannot be mistaken for a stall in Web 3 development; for the BEAR market is an excellent time to...

Importance of Setting Gas Price on the BandChain

Our latest and monumental upgrade to the BandChain has brought about massive improvements to the user experience that culminated to a muc...

After years of providing reliable price feeds for decentralized applications (dApps), we are proud to reveal the newest use-case for our ...

Since the launch of Laozi-testnet-6 last week, and having enabled the latest IBC version, we are now so excited to announce that we are r...

Randomness is a fundamental function that helps to operate many modern decentralized applications (dApps). However, the root and foundati...

We’re excited to announce that Band Protocol has successfully integrated our price feed with Nervos’ Layer 2, Godwoken to the mainnet. Ba...

OKC, also known as OKX Chain, a secure & programmable smart contracts platform that is backed by one of the leading cryptocurrency exchan...

BitTorrent Chain (BTTC), a unique project that aims to revolutionise the market for P2P file-sharing platform, has partnered with Band Pr...