Get the RUNE Token and Safely Secure it on Numio

Download Numio today for free and get RUNE tokens. Thorchain is a blockchain protocol that is built on Cosmos, the proposed “internet of blockchains”, to enable inter-chain trading with the aim of making the entire crypto market fully liquid. It wants to enable the trading of non-native crypto assets in a decentralized manner that are currently siloed on their own blockchains without having to go through the intermediary of a third party like a centralized exchange.

What Does Thorchain Do?

With popular DEXs like Uniswap doing over $1 billion of daily trading volume alone, and this number ever rising, the market is growing. However, these Ethereum based protocols (and DEXs that exist on other blockchains, like Solana) can’t extend to trade assets on other blockchains. Each economy is fenced off from one other, and that hurts liquidity in the market and exposes traders to more sudden market shocks when liquidity seizes up on a particular asset – even if there is plenty available on other blockchains.

Why is Thorchain Useful?

Usually, the process by which this occurs is wrapping assets on a custodial bridge, and minting a synthetic representation that can be deployed on another chain temporarily before its sent back to that bridge and released on its progenitor chain.

However, this wrapping comes with all sorts of issues, as it still requires the use of an intermediary. Although wrapping protocols’ trust and governance are often decentralized, they are still vulnerable to being hacked open or the funds being stolen. Furthermore, if a wrapping protocol’s trust is eroded, or itself becomes illiquid, then issues can occur with synthetic tokens losing their peg, not to mention the cumbersome nature of the exchange.

How Does Thorchain Work?

Connecting the dots of the blockchain islands is a key challenge for the evolving crypto space, Thorchain hopes to use the technology behind Cosmos Tendermint and the IBC, to allow assets to be traded natively and erode the need for these custodial bridges or centralized exchanges but retaining and trustless, decentralized architecture that cuts out the middleman.

It exists as a network of nodes built with tendermint and utilizing the Byzantine Fault Tolerance model it provides. Thorchain nodes monitor vault addresses using the Bifröst protocol and, when a user deposits a crypto for trade, say Ethereum, then it initiates a swap for the requested asset, say Bitcoin. The Thorchain nodes act as witnesses for the transaction and then tell the Bifröst protocol to initiate a withdrawal of the Bitcoin. It then translates this data for both networks so the verification is complete, and then the swap is completed.

It uses TSS, or Threshold Signature Schemes. These are an upgrade on the multisig cryptographic procedures that are commonly used on wrapping protocols. TSS is distributed signage that requires a certain number of witnesses to sign the contract. The benefit of it compared to multisig is it is a flexible, general cryptographic model, and can be applied generically, rather than having to build a smart contract or application to run the multisig procedure. It’s still new, and there are fears it could be less cryptographically hardened than traditional methods, but current research and use-case indicates its effectiveness.

What is the RUNE Token?

The Thorchain protocol’s token, RUNE, is the native asset that helps the chain run. Staking RUNE is called bonding. Users wanting to act as a fully operational Thorchain node must deposit 1,000,000 RUNE tokens. Furthermore, unlike many other protocols, delegation is not allowed. This helps to distribute the responsibility wider and ensure greater legitimacy of nodes.

In addition, Thorchain nodes every 50,000 blocks are subject to churning, and unreliable nodes are replaced by candidates who are waiting to participate. RUNE holders are incentivized as all liquidity pools on the network contain RUNE, and assets are paired with it on their way to each other. It’s the oil which greases the trades. 33% of RUNE in the system acts as liquidity for trades, with the rest bonded. If this ratio falls out of line, incentives are increased to restore the ratio. RUNE is also used to pay transaction fees for traders looking to trade.

Native cross-chain trading is becoming a bit of a holy grail in crypto, as it promises to explode the already impressive growth of the DeFi sector. Thorchain is another protocol promising the solution, but with its solid network of invested stakeholders, it has a great chance of becoming a premier protocol to trade non-native blockchain assets between each other.

Is RUNE Hard to Get?

Getting cryptocurrencies, whether by purchasing or trading, can be a daunting prospect for beginners. This is particularly true for any cryptocurrency that isn’t Bitcoin or Ethereum – with Ethereum tokens, also known as ERC-20 tokens, such as RUNE being a prime example.

If you are thinking about getting RUNE then Numio is a great choice for handling your assets. Numio allows you to pay people using your stored RUNE assets, as easily as if it were cash. If you are a bit more crypto savvy you can also trade and swap RUNE at the touch of a button.

How can I get RUNE?

There are multiple ways to get RUNE on Numio. You can purchase RUNE with your credit or debit card, you can trade it for other ERC-20 assets (up to 100x cheaper than other wallets), or you can receive it as a payment. Whatever way you choose you can be sure that you are always in full control of your RUNE.

RT @familiarcow: The path for @THORChain to become a piece of the decentralized trading infrastructure the industry desperately needs (🧵/13…

RT @SpotWiggum: 25 $ETH was just added to the Ethereum savings vault in one transaction! As confidence grows in Thorchain's savings vaults…

Which will be the first vault to fill up 100%? https://t.co/vdqQfEEBGy 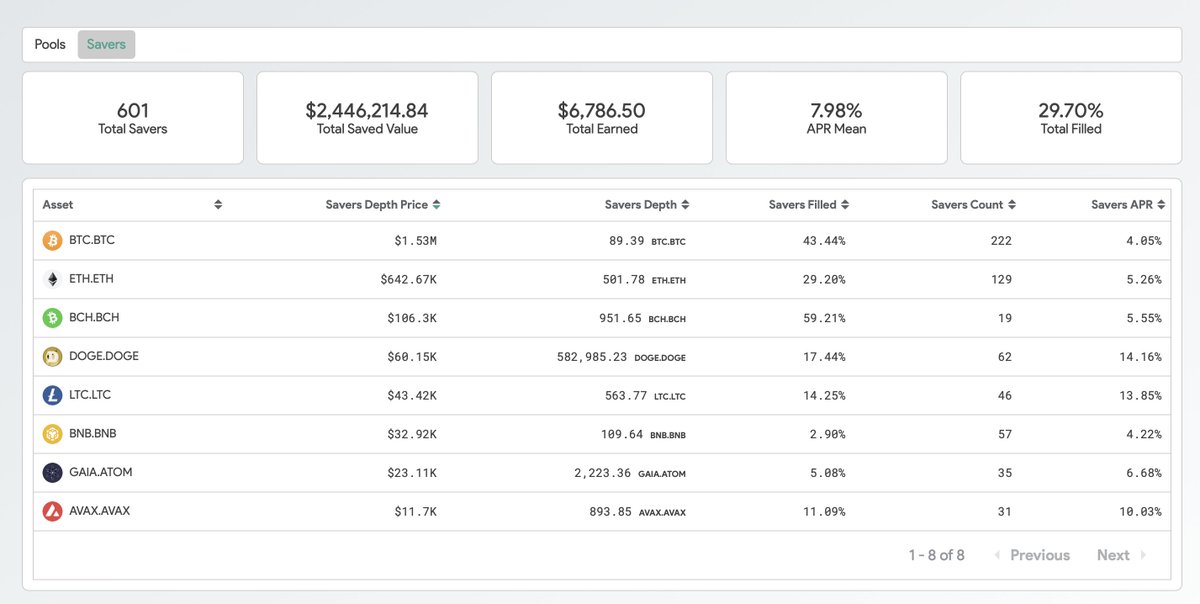 At a time when many centralized options have come under stress, THORChain now offers a permissionless, open-source, decentralized self-cu...

Avalanche C-Chain native asset swaps are now available. Users can now add liquidity and make swaps to and from Bitcoin, Ethereum, and six...

Edge has completed its integration with THORChain and will be offering its users access to decentralized native cross-chain swaps. Edge h...

THORChain Tokenomics — What is RUNE?

The past year for THORChain has been focused on the network security and stability phase. With the recent achievement of Mainnet, this si...

Within DeFi, measuring a liquidity pool performance is a difficult task due to many contributing factors. How “APR” or “APY” is calculate...

THORChain is pleased to announce the achievement of Mainnet, 4 years in the making! From its inception in 2018 until now, THORChain has p...